Savant is beloved as a smart home platform for one crucial reason: It is incredibly simple to use. It takes complex tasks across un-connected devices, and brings them into a simple interface with a barely noticeable learning curve.savant home installation nyc

The Savant system does most things really well. They look at user experience with the understanding that 99% of the time people are likely to control their home in a similar way. Rather than labor over the 1% that requires deep custom programming, they’ve decided to perfect the 99% and say “no” to the 1%.

It’s a similar approach to Apple, who limits both their product line, and the menu options within their software, down to a “don’t make me think” experience. Clearly Savant admires the Apple approach, seeing how they use the Apple ecosystem. The actual brain for a Savant system is a Mac Mini, and Savant programming can’t even take place on a PC. Every Savant programmer uses a Mac.

There are two items that lets users experience and interact with the entirety of their Savant home, the handheld remote and the Application on your smartphone. savant home installation nyc

Handheld (The Savant Pro Remote)
The handheld remote is an example of refined design. It has the dedicated buttons of a classic remote, a touch screen for more advanced features, and voice control built in. Yet, it doesn’t overwhelm. There are fewer than 20 buttons on it. Hold it in your hand and you’ll 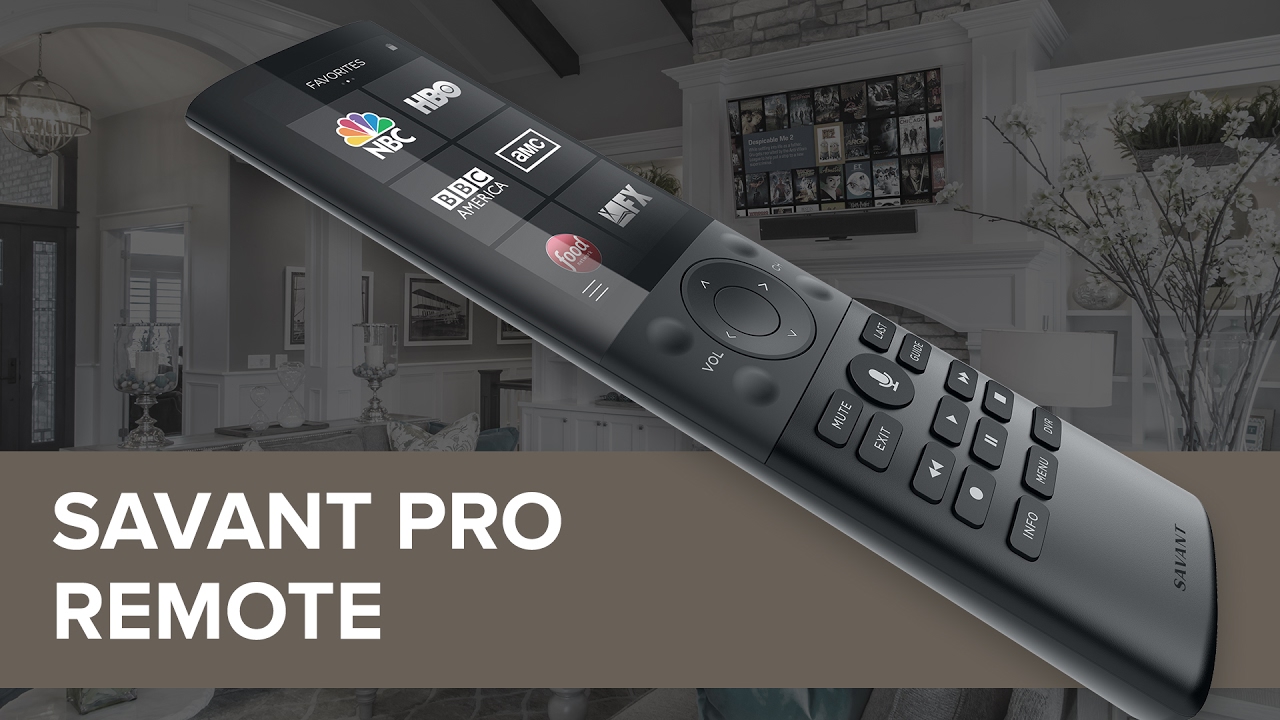 Meanwhile, the touch screen on top (also ergonomically where you would expect it to be) floats your most commonly-viewed channels to the top for easy access. With one swipe you can adjust your other available features (music, lighting, shading, thermostat, etc.) A central voice control button offers yet another way to order up channels, turn on lights, and activate scenes.

The Savant Pro remote is the cleanest and simplest way to combine all of your devices (Apple TV, Roku, etc.) into one device simple interface.

The App (The Savant Pro App)
Beyond TV, most Savant users will reach for the Savant Pro App on their phone or iPad to control the rest of their home. The quality and layout of the interface is drop dead gorgeous. It’s also the same no matter which integrator you hire (this is important for users with multiple homes.)

Savant’s App accomplishes personalization by using photos of each room to identify them. This lets you scroll through and select rooms without thinking, but more importantly lets you adjust the room by tapping elements in the photograph. For example, tapping a lamp in a rooms photo will turn it on right in front of you.

Smarthome platforms used to require a professional to physically come to your house whenever you wanted to change your favorites, or “scenes.” Savant changed this by letting users easily adjust a room’s settings, name it as a scene, and call it up later. You can even schedule its occurrence based on a wide array of circumstances.savant home installation nyc

Integration
A lot of Savant’s power comes from the programming behind the scenes. Their constant and painstaking generation of drivers to make 3rd party devices compatible is impressive. Their deeper integration with leading brands like Sonos, Lutron and Nest make controlling them through Savant feel as powerful as if you were using the brand’s native controller.

They’ve also integrated with Amazon Alexa, letting you control your home with any Alexa enabled device.

Climate
Nest is great for simple homes, but falls short when trying to control multiple styles of heating and cooling systems (i.e. radiant floors with a mini split system.) This requires separate thermostats and more wall acne… Savant is different. They make it simple to bring many zones across multiple systems into one clean system.

Video
Video matrixing (or sending one video source to any number of TVs) used to require big expensive switchers, which were typically limited to 16 inputs and 16 outputs. Savant, along with Video-over-IP technology, now allows as many inputs and outputs as you need, scaling infinitely over your network. (The same for audio.) For most people, this means that instead of having one cable box and one Apple TV for each room, they can have one for the parents and another for the kids. Anyone can then pull up any device onto any screen in the house.

Savant absolutely slays it with video tiling. Their ability to turn one screen into a quad screen or picture-in-picture is as simple as dragging and dropping in the Savant App. They do this very, very well.savant home installation nyc

Camera Integration
Security cameras integrate smoothly into the Savant App via IP. The end user sees a little camera icon, bringing them into a live feed of all of their cameras in one clean space.

But how do you limit access to camera feeds so that not every guest will find them?…

Network
Savant requires network communication for all of its devices. Consequently, a weak network equals a weak experience. Two important elements a Savant-ready network must have are:

The whole of the Savant Home system can be set up by our experienced professionals at NYC IT Tech.

Contact NYC IT Tech for a free consultation on all your Savant Home Automation needs in New York City, Queens and Long Island.